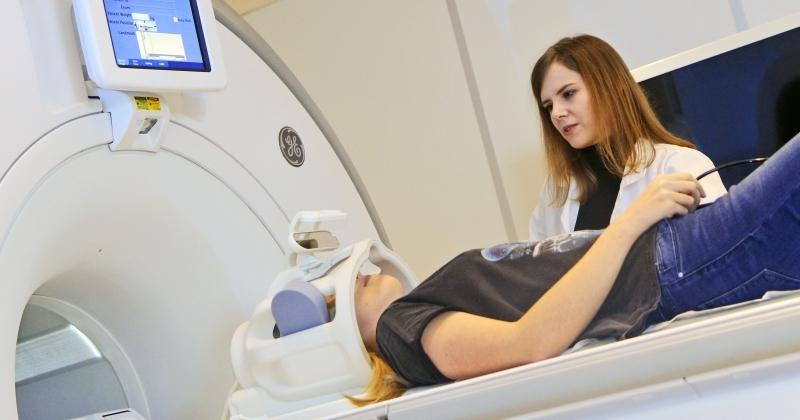 Dr Karolina Finc from the NCU Interdisciplinary Centre for Modern Technologies (NCU ICMT) has looked at how the human brain changes during cognitive training. The results of her research have just been published by the prestigious journal "Nature Communications".

The complexity of the human brain is so great that it is difficult to describe it using basic methods of neuroimaging data analysis. This brand-new field of science helps in this respect, and it is researched by dr Karolina Finc from ICNT. It is a network neuroscience which focuses on the study of the complex network of interconnections in the human brain with the use of mathematical algorithms derived from graph theory.

It turns out that even when we do not perform any cognitive tasks, the brain areas performing similar functions actually work in a synchronized way. By measuring the degree of this synchronisation, we are able to reconstruct a map of functional connections in the entire human brain, the so-called functional connectome," explains dr Karolina Finc.

The functional connectome is constantly changing - it can change both after intensive learning or training (e.g. music-related, motor-related or cognitive one, i.e. consisting of a sequence of certain moves), and in real time to adapt to the changing difficulty of the tasks we face on a daily basis.

- The aim of our research was to broaden the knowledge about how the brain's functional networks optimise their organisation during a cognitive task with increasing difficulty and how this reorganisation pattern changes during cognitive training," says dr. Finc.

The research was carried out using the equipment that the NCU ICMT is equipped with - in particular functional magnetic resonance imaging (fMRI). A team of scientists examined 46 healthy volunteers. The activity of their brains was checked four times between periods of intensive work memory training. The fMRI examination took place before and after two, four and six weeks of the training.

Half of the volunteers underwent a more demanding training with the use of memory tasks, while the remaining 23 people practised similar tasks, but at the lowest level of difficulty possible. Their results were compared.

The results of our research may allow us to understand what makes someone's brain learn faster and someone else slower, and what characteristics of the brain's network have an impact on it," explains dr. Finc.

- The knowledge gained may also contribute to the development of new methods of measuring the dynamics of plastic changes in the brain and, in the future, to a better choice of medicines and therapies.

The prestigious scientific journal Nature Communications has become interested in the work of the researchers from Toruń. On Friday 15th May, an article "Dynamic reconfiguration of functional brain networks during working memory training" was published in the journal, presenting the results of their research. Its main author is dr Karolina Finc, and the co-authors include mgr Kamil Bonna and dr habil. Włodzisław Duch from the Faculty of Physics, Astronomy and Informatics.

The research on the reorganization of the functional networks was made possible thanks to the support of the National Science Centre as part of the PRELUDIUM (2015/17/N/HS6/03549) and ETIUDA (2017/24/T/HS6/00105) scholarship, and the Foundation for Polish Science as part of the START programme extended by the Barbara Skarga stipend for interdisciplinary research. The work was prepared in cooperation with scientists from the Complex Systestems Group (Danielle Bassett, Xiaosong He, David Lydon-Staley) from the Faculty of Bioengineering at the University of Pennsylvania (USA) and Simone Kühn from the Max Planck Institute for Human Development in Berlin (Germany).The research that is the basis of this publication was created with the use of the equipment that NCU ICMT is equipped with, in particular functional magnetic resonance imaging (fMRI). The scientific computations were made with the support of Wroclaw Supercomputing and Networking Centre. The publication costs were covered from the project "Open NCU - Open Source, Open Science."

Dr Karolina Finc is the leader of the Computational Neuroimaging Team at the NCU ICMT, a member of the Neuroinformatics group operating within the Centre of Excellence Dynamics, mathematical analysis and artificial intelligence. She is a graduate of cognitive science from the Faculty of Humanities (currently Faculty of Philosophy and Social Sciences) at the Nicolaus Copernicus University. She completed her doctorate at the NCU ICMT. Her scientific interests are focused on the study of the plasticity of the human brain, and in particular its network of connections - the connectome. She is involved in numerous projects using neuroimaging methods. She has extensive knowledge and competence in the analysis of data from research on the structure and functional organization of the brain. She is the head of the Scientific Research Society of Neuroimaging operating at the Nicolaus Copernicus University. She is the winner and beneficiary of many competitions, scholarships and grants for young researchers, including PRELUDIUM (2016) and ETIUDA (2017) programmes financed by the National Science Centre and the START (2018) scholarship of the Foundation for Polish Science, extended by the Prof. Barbara Skarga stipend for researchers whose investigations are marked by bold crossing borders between different fields of science, open new research perspectives and create new values in science. In 2014 she completed an internship at the Max Planck Institute for Human Development in Berlin (supervisor: Simone Kühn), in 2018 at the University of Pennsylvania (supervisor: Danielle Bassett), and in 2019 at Stanford University (supervisor: Russell Poldrack).